Cypress Army PALS Evaluation February 1987- Jim at Ft. Greely, Alaska with U.S. Army for comparative testing of cold weather clothing in their -60°F test chamber.
10, 1993
TO: Whom It May concern

During the period from July 1984 to the present, I have known Jim Phillips professionally as a recognized expert in cold weather survival. As a Business Development Firm specializing in products for the Military Services, Cypress International had numerous occasions to sponsor Mr. Phillips into a large number of military audiences. Within Cypress, I was the program coordinator for this effort and as such accompanied him on many of the promotional visits. Three main attributes stood out during Jim's presentations. First, he is truly a cold weather expert and enthusiast; secondly, he is an excellent communicator at any educational level, and, third; he is always completely honest and truthful. Our marketing sessions covered all levels of the Military establishment from very senior General Officers to entry level personnel. 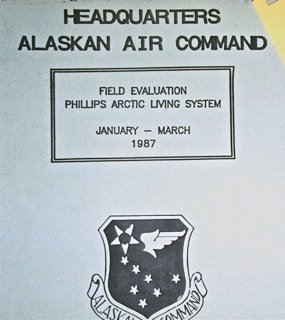 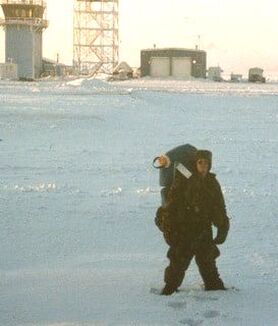 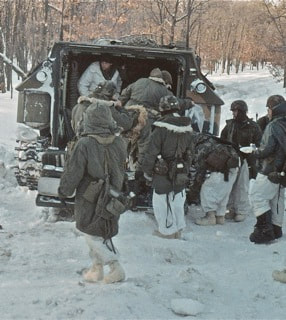 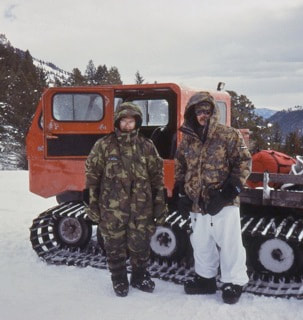 Scott Swofford Beaver January 1995- Swofford visited one of Jim Phillips’ Winter Industrial Safety Training Classes (WIST) to confer on questions about the PALS Clothing he was wearing.
To: Whom it may concern
From: Scott Swofford
Date: November, 1996

I have been acquainted with Jim Phillips for some time now, but even before formal introductions, I was a recipient of the benefit of his knowledge. Being a documentary film maker in Utah puts me frequently in the harshest of cold conditions. Pain and occasional injury were expected elements of these assignments until we began to employ some of the methods and technologies developed by Jim.

I've stood for eight hours on the frozen bank of Jenny Lake in the Tetons at nearly 20 below, without even so much as discomfort, let alone disability.

Jim is an honest, moral, intelligent person whose own commitment to survival has lead many of his associates to wonder if there is any trial, any setback he could not at least weather successfully, and more likely remain joyful while enduring. His training focuses not just on the skills and equipment necessary to survive against all odds, but more importantly on developing the mindset and character to face all obstacles.

I can recommend him without qualification. 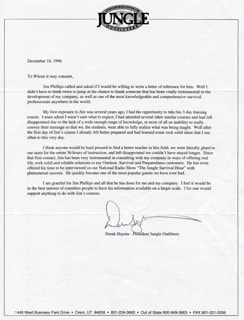 Jim Phillips called and asked if I would be willing to write a letter of reference for him. Well I didn't have to think twice to jump at the chance to thank someone that has been vitally instrumental in the development of my company, as well as one of the most knowledgeable and comprehensive survival professionals anywhere in the world.

My first exposure to Jim was several years ago, I had the opportunity to take his 3 day training course. I must admit I wasn't sure what to expect, I had attended several other similar courses and had left disappointed due to the lack of a wide enough range of knowledge, or most of all an inability to really convey their message so that we, the students, were able to fully realize what was being taught. Well after the first day of Jim's course I already felt better prepared and had learned some rock solid ideas that I use often to this very day.

I think anyone would be hard-pressed to find a better teacher in this field, we were literally glued to our seats for the entire 36 hours of instruction, and left disappointed we couldn't have stayed longer. Since that first contact, Jim has been instrumental in consulting with my company in ways of offering real life, rock solid and reliable solutions to my Outdoor, Survival and Preparedness customers. He has even offered his time to be interviewed on our National Radio Show "The Jungle Survival Hour" with phenomenal success. He quickly became one of the most popular guests we have ever had.

I am grateful for Jim Phillips and all that he has done for me and my company. I feel it would be in the best interest of countless people to have his information available on a larger scale. I, for one, would support anything to do with Jim's courses. 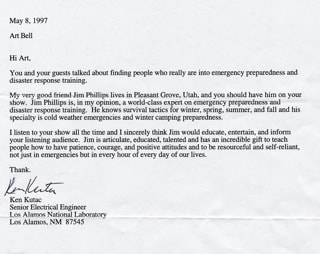 Art Bell
Hi Art,
You and your guests talked about finding people who really are into emergency preparedness and disaster training.

Jim Phillips lives in Pleasant Grove, Utah, and you should have him on your show. Jim is, in my opinion, a world-class expert on emergency preparedness and disaster response training. He knows survival tactics for winter, spring, summer, and fall and his specialty is cold weather emergencies and winter camping preparedness.

I listen to your show all the time and I sincerely think Jim would educate, entertain, and inform your listening audience. Jim is articulate, educated, talented and has an incredible gift to teach people how to have patience, courage, and positive attitude and to be resourceful and self-reliant, not just in emergencies but in every hour of every day of our lives. 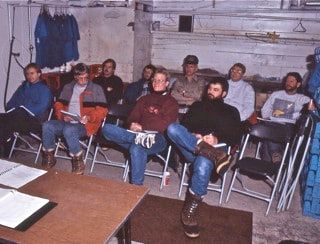 Peterson Equipment Company, a snowcat dealer for over 30 years in the Rocky and Intermountain Regions, has offered, as a benefit to their customers, a service and operating seminar. For the last several years they have included a course in Winter Survival given by J.P. Associates. Jim and his staff have proven to be the highlight of these seminars. His presentation is direct and all encompassing, harmonious and understandable.